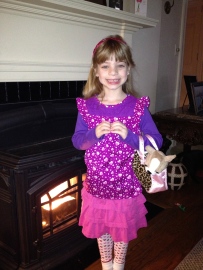 So, yesterday, we spent a little Valentine time together, just me and my kids. It was a little more challenging than I anticipated though.

We went to Walmart to get a few things, but specifically for Drew Elizabeth to pick out Valentines to take to school. In 1st grade, Valentine’s Day is quite a big deal, you know. As for Joshua, in 5th grade, not so much. He wouldn’t dream of giving out Valentine’s. (Although he will be thrilled when the chocolate covered pretzels I am having delivered to his class arrive.) He’s growing up way to fast, apparently by the time you get to 5th grade, Valentines aren’t so cool. So, I was glad he helped his sister with her Valentines, and without his help Drew would have gone to school with no Valentines to give out.

BTW- I DO NOT recommend waiting until February 13th to get Valentines for your kids to take to school. By this time, the choices were beyond limited, one thing left was Princess Valentines, which Drew Elizabeth would never give out. (She says she “DOESN’T DO” princesses!) The other choice, Origami Valentines… HA…. not as fun as it sounds…..

When we started in on the cute little origami ladybugs and butterflies, it didn’t look to hard. Fold in half, fold this way, crease that way….

We got the ladybugs done, not too bad, fold in half, fold up a little at the bottom, fold back down, fold back up, turn over, diagonal fold, another diagonal fold, and low and behold, we had a ladybug, CUTE!! Well, that was only half of them. Now time for the 16 step butterflies…..but first, it was time for dinner. (Thankfully, my husband had that under control while we were folding away.)

Origami butterflies are NOT easy, especially if you haven’t done origami before. This was when I was glad to have a brilliant big brother helping, and fortunately he has done origami before. Josh tried, and tried, I tried and tried…. Josh finally got the already folded display butterfly off the box to unfold and figure out. Then, we went online looking for “how to fold a square into and origami butterfly.” Found it, but it wasn’t any more helpful than the picture directions we already had that were about as clear as mud. Drew was getting tired, we only had enough ladybugs for half the class, and Josh was ready to give up….. Daddy’s suggestion, got to bed….

I looked at Drew, she was so tired, but also sad, if we gave up there would not be enough Valentines for the whole class, it was all or nothing now. Josh and I kept at it, as Drew sat there yawning. (My poor girl, she loves her sleep.) Then, Eureka…. Joshua finally figured it out!!

It was time for an assembly line, Drew did the first 3-4 folds, I did the next tricky part, and Josh finished them off! (Daddy just quit on us and went to take a shower.)

So, today, Drew Elizabeth was off to school with her bag of origami Valentine cards to give out. There is no way in He!! that those first graders will understand how much trouble those stinkin’ things were, but they really are pretty darn cute. 😉

So, lesson learned, spending time with your kids is always a winner, regardless of the challenges… never give up… perseverance pay off…. and NEVER EVER buy origami Valentines again!!

I hope you are enjoying this Valentine’s Day with your family, it’s one of the sweetest parts of the journey! 😉

“Love is the strongest force the world possesses, and yet it is the humblest imaginable.” – Mahatma Gandhi 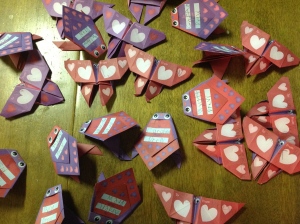